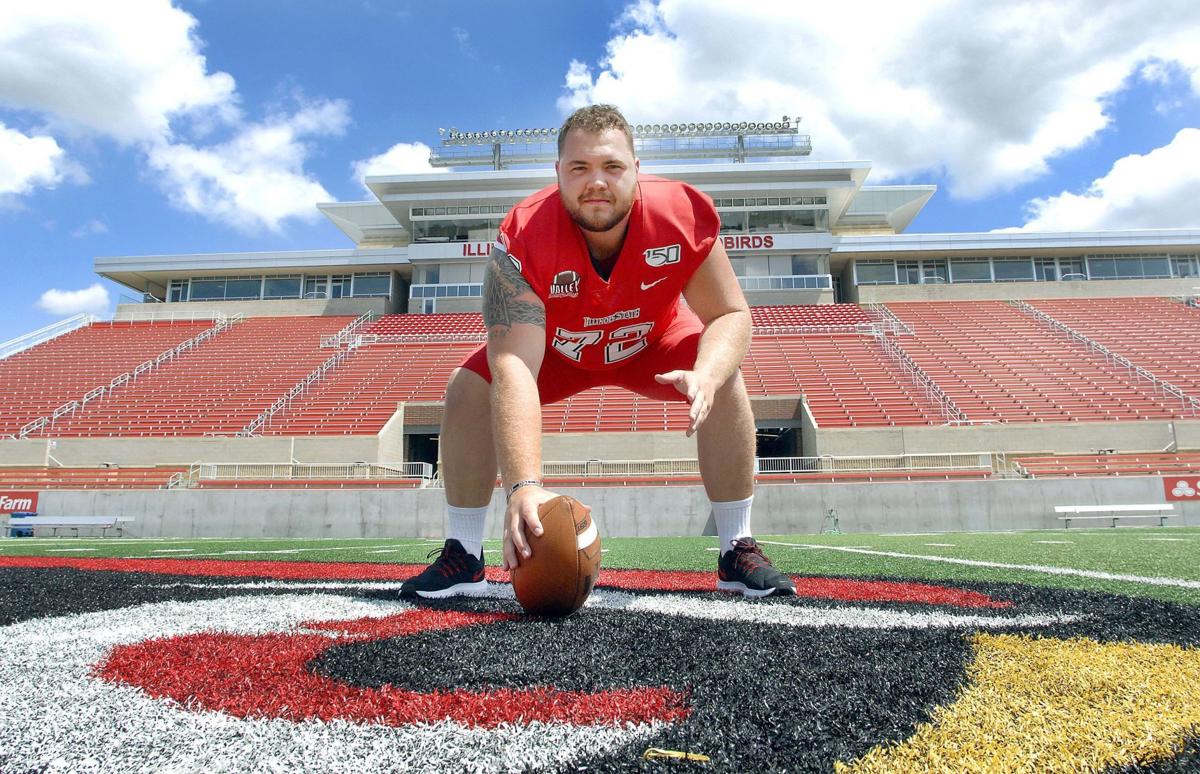 The big biceps, tree trunk legs, stubble of a beard and form-fitting No. 72 jersey tell you Garrett Hirsch is a football player.

It would be a mistake to stop there.

Even on Illinois State's Media Day, an annual reporter scrum designed for talking football, Hirsch is more than the No. 1 center on ISU's depth chart.

Sure, he makes line calls, snaps the ball, churns his feet and powers into defenders. Football matters to him.

Yet, so does Shannon. She was the adult Special Olympian who Hirsch worked with/encouraged during the Illinois Special Olympic Summer Games in Normal.

Competing in power lifting, Shannon "hit a deadlift PR (personal record) of like 245 pounds," Hirsch said. "I went just as crazy as she did. She was a sweetheart."

There you have it. While football stokes Hirsch's competitive fire, volunteering at events such as Special Olympics warms his heart.

The 6-foot-2, 300-pound junior helps with the lifting competition each summer. Volunteers typically sign up for half a day. Hirsch goes all day.

He calls it "my favorite thing to do every summer," and gaining perspective on his own good fortune is only part of it.

Watching the Shannons who compete — young and old — lifts him up, as surely as if he was the barbell in their hands.

"It's so awesome to see those kids and those adults .... they've all found their passion and they're all working for it," Hirsch said. "To see them get their PR's, it's like I PR'd in something."

Among 137 nominees from all levels of college football, Hirsch fits the requirements of being "actively involved with a charitable organization or service group while maintaining a strong academic standing."

"I'm not very good at it," he said, smiling. "I do my best. I try and work on it every year. it's a sore subject. My parents always mess with me about it. But I try."

There is honor in that. There is in a high grade-point average as well, and at 3.97 Hirsch's is nearly perfect.

He points out that in his major, exercise science, he has a 4.0. His lone college B came in a class for his minor, psychology.

Hirsch reports having one B at NCHS as well ... in honors biology.

It just may not be anytime soon.

He will tell you his mother, Stacey Hirsch, is the source of his academic successes.

"I kind of have a photographic memory," he said. "Everything clicks a lot easier for me. I thank my Mom every day because she's the same way. It's all Mom."

Hirsch learned in July he had been nominated by ISU Athletics Media Relations director Mike Williams, seeing it in a Twitter post by Williams.

"I wasn't expecting it at all," Hirsch said. "I was obviously excited and happy about it, but that's not something you get called for all the time. It was super cool to see my name there."

In Hirsch's eyes, being considered qualifies as a win. He'd like to rack up a lot of victories on the field as well, saying the Redbirds have made "unbelievable strides" since last year's 6-5 season.

"This is the most excited I've been about a team since my senior year of high school," he said.

Seems Hirsch and the Redbirds have "found their passion and they're all working for it."

Kindred: No Mike Troll? Football practice will open with a void

You learn to expect certain things on the opening day of football practice ... a lineman lagging behind during sprints, a player icing an inju…

Kindred: Forty-six points in a half? It's the stuff of legend, courtesy Howard Nathan

Micheal Mosley and Howard Nathan were becoming good friends, though with Mosley at Peoria's Roosevelt Magnet School and Nathan at Blaine-Sumne…

Kindred: Peyton Dillingham will play on after long wait

Someday, a bothersome back or sore neck could lead you to Peyton Dillingham. His plan is to become a chiropractor.

ISU center Hirsch to be out 'a few weeks' with injury

Former Bloomington High School star Brandon Hughes doesn't look back on a football career that took him to Oregon State and the NFL. He's too busy looking forward each day to a life that includes his wife, two children and a successful business.

Kindred: After two bouts with cancer, Jake Wegner still in the game he loves

After two bouts with cancer, Normal Community graduate Jake Wegner is still in baseball as manager of the Bloomington Bobcats. Only 22, he's good at it, too. The team won the league title and Wegner was Manager of the Year.

Normal Community graduate Garrett Hirsch has decided to leave the Illinois State football team, seeking a school where he can get more playing time for his final season of eligibility.