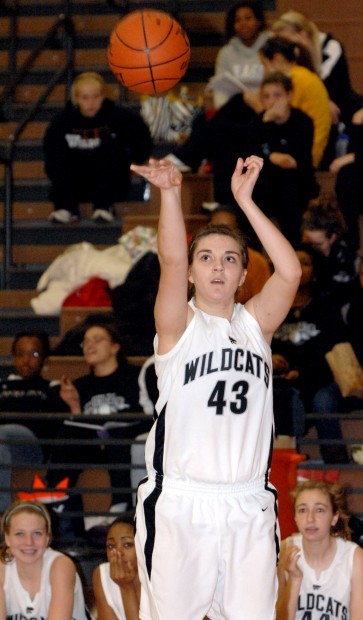 West's Anne Brown goes up for a shot against Kahoks Saturday, Dec. 19, 2009, during the fourth quarter at Normal West High School. (The Pantagraph/CARLOS T. MIRANDA) 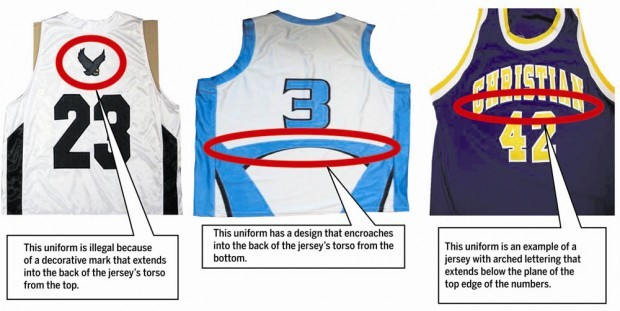 The IHSA responded Thursday to a growing outcry from athletic directors and coaches concerned about a financial hit of nearly $4,500 to replace uniforms or have their teams penalized a technical foul to start the game.

“We have no intention of requiring schools to expend additional dollars now, or in the future, to replace illegal uniforms,” IHSA executive director Marty Hickman said. “We fully realize there are many more pressing financial needs in our schools than basketball uniforms.”

Schools with illegal uniforms such as the basketball teams of Normal West and Fieldcrest need only apply for a waiver, and they can use their uniforms for the rest of the season, including the state series, without penalty, the IHSA said.

They can also continue to use the uniforms by receiving a waiver on an annual basis until the normal replacement time for their uniforms.

Schools with illegal uniforms that fail to apply for a waiver will continue to have a technical foul given to their coach prior to the start of the game.

Normal West plans to replace its uniforms next season anyway, but Fieldcrest hopes to get another three or four years out of its uniforms.

“There are many schools who are embarrassed by the situation,” he said. “There have also been schools who we have dealt with who are upset, upset at their vendors, upset with us, upset in general.”

Fieldcrest athletic director Dan Wieczorek believes the IHSA cracked down on illegal uniforms this season because of a high profile case last season.

In the Class 3A boys state tournament semifinals, North Lawndale College Prep was assessed a technical foul for having stripes on the sides of its uniforms that violated a National Federation of State High School Associations rule. Champaign Centennial made one of the two free throws before tip-off and went on to win by a point.

Wieczorek, whose uniforms are illegal because the word Fieldcrest arches below the top of the number, believes that once the IHSA put its foot down on North Lawndale, it had to keep stomping.

“If you sit on them for uniforms and ignore the remaining illegal uniforms, you are playing favorites,” said Wieczorek, who found out Fieldcrest had illegal uniforms in the third boys game of this season. “It did come as a shock to us.”

It wasn’t game officials who noticed the problem during the game at Tri-Valley High School. It was Gibson.

“The uniform rule has not changed significantly for a number of years,” he said Wednesday.

“If people still aren’t in compliance and they are being penalized, I’m not sure whose fault that is, but we certainly don’t feel we’ve done anything out of the ordinary or out of sorts here.”

The rule was vigorously enforced during the recent State Farm Holiday Classic where the Normal West, University High, Chicago Hope and Champaign St. Thomas More girls teams were ruled to have illegal uniforms.

A technical foul was assessed against the coaches, who then could not stand the rest of the game. Their foes shot two free throws and got the first possession.

“We had never had uniforms questioned before that I can remember,” said U High athletic director Wendy Smith, who later took the “illegal” uniform to the IHSA office in Bloomington, where it was ruled to actually be legal.

Normal West had worn its illegal uniforms without incident for three years.

“Some of those rules you don’t see all the time so you don’t pay a lot of attention to them,” said West athletic director Stan Lewis. “It was one that we completely missed, but ours were definitely illegal.”

Fieldcrest and West have both received their waivers.

Wieczorek accepts that uniform numbers need to be easily read by officials. He believes the problem began when some schools, including pro teams, got “carried away” with uniform designs.

Watch now: Mets open up series with 5-2 victory over Cubs

Watch now: Mets open up series with 5-2 victory over Cubs

How could the rest of the Bucks Nets series shape out?

How could the rest of the Bucks Nets series shape out?

West's Anne Brown goes up for a shot against Kahoks Saturday, Dec. 19, 2009, during the fourth quarter at Normal West High School. (The Pantagraph/CARLOS T. MIRANDA)