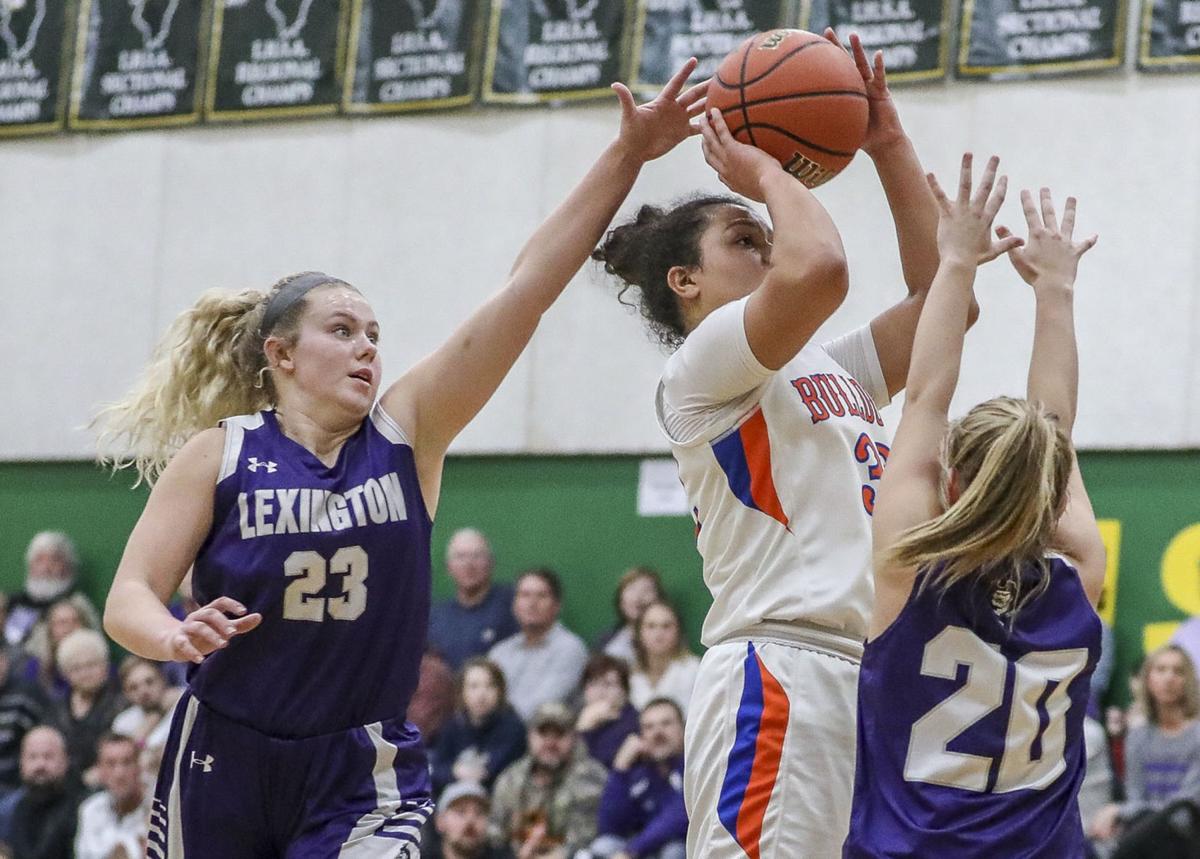 Pantagraph Female Athlete of the Year Jayden Standish (23) of Lexington High School averaged 14.8 points and 7.1 rebounds per game this past basketball season. 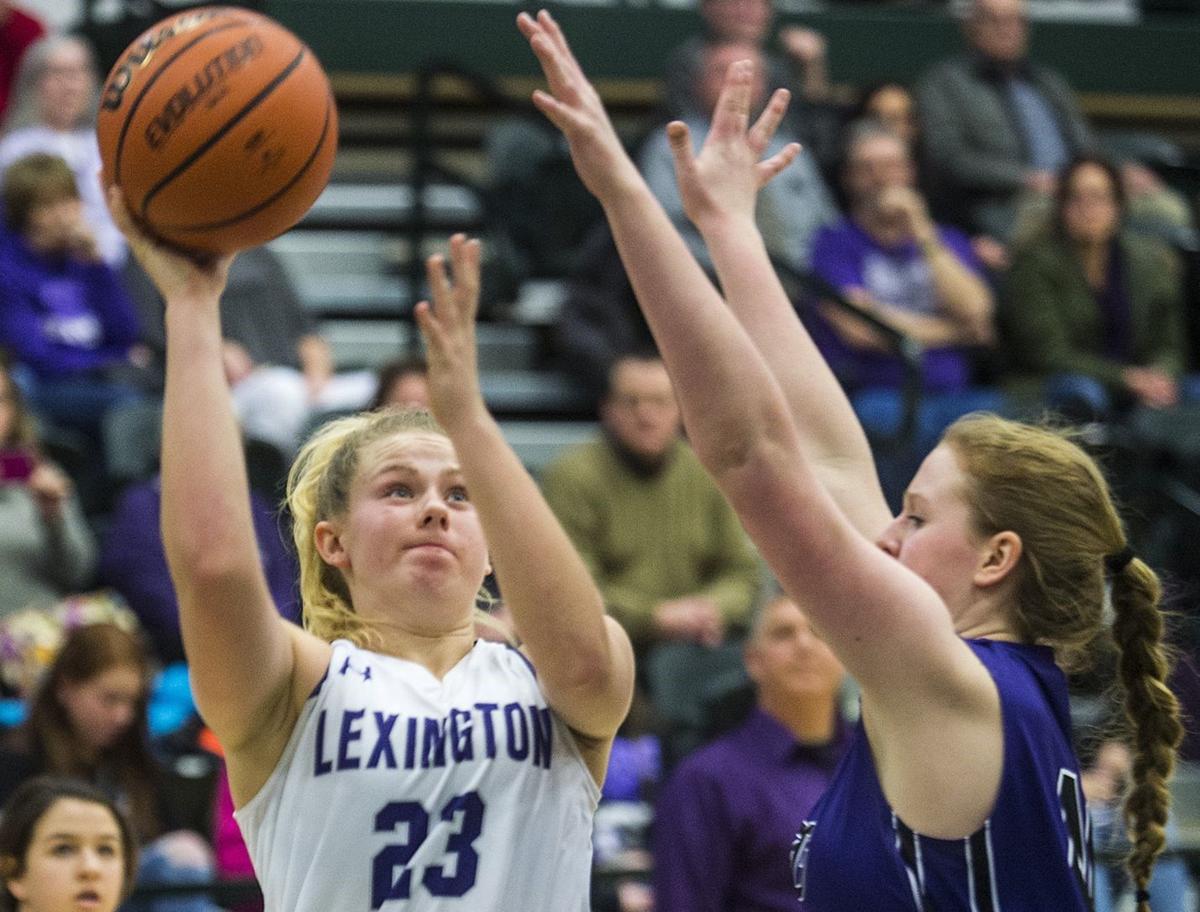 Lexington's Jayden Standish shoots over El Paso-Gridley's Sierra Carr during the Minutemen's 41-24 victory over the Titans in a semifinal of the McLean County/HOIC Tournament on Thursday, Jan. 18, 2018 at Shirk Center in Bloomington. 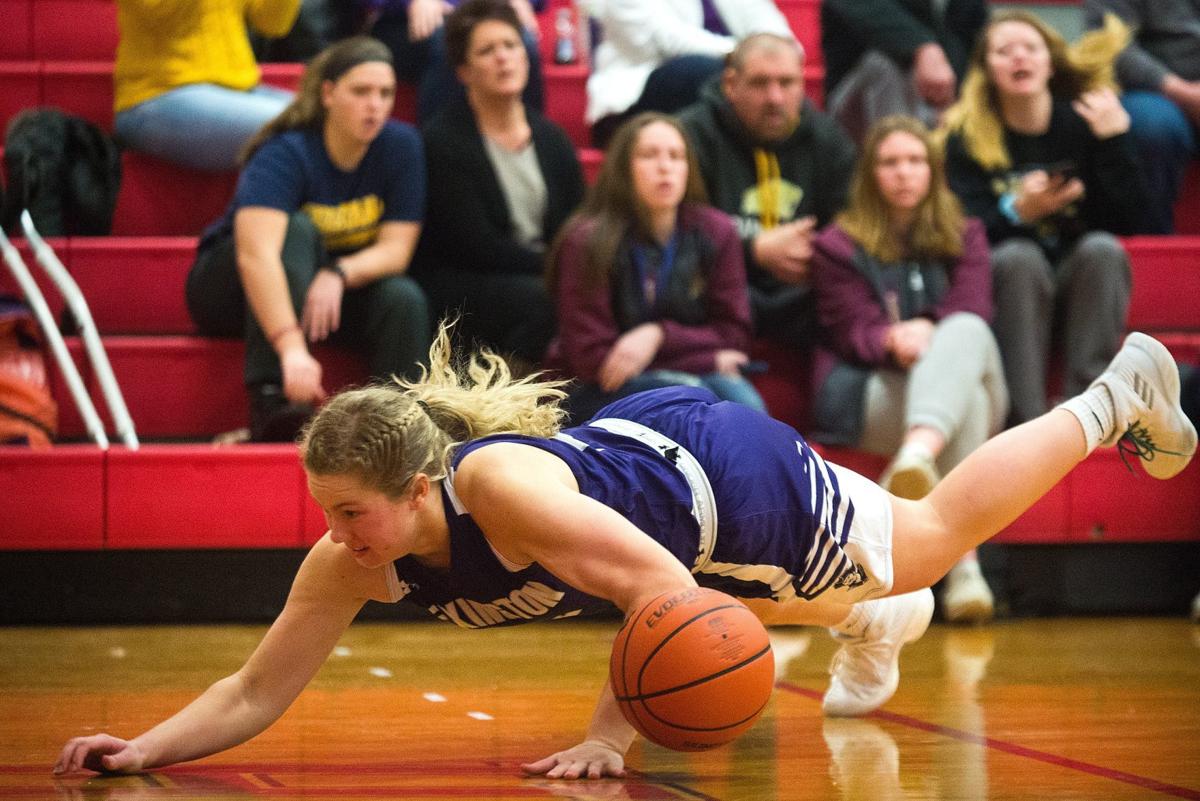 Lexington's Jayden Standish hustles for a loose ball during the Minutemen's Class 1A regional championship game against Ridgeview on Thursday, Feb. 7, 2019, at Heyworth. Standish led with 13 points and four rebounds, but Ridgeview held on to win, 45-40. 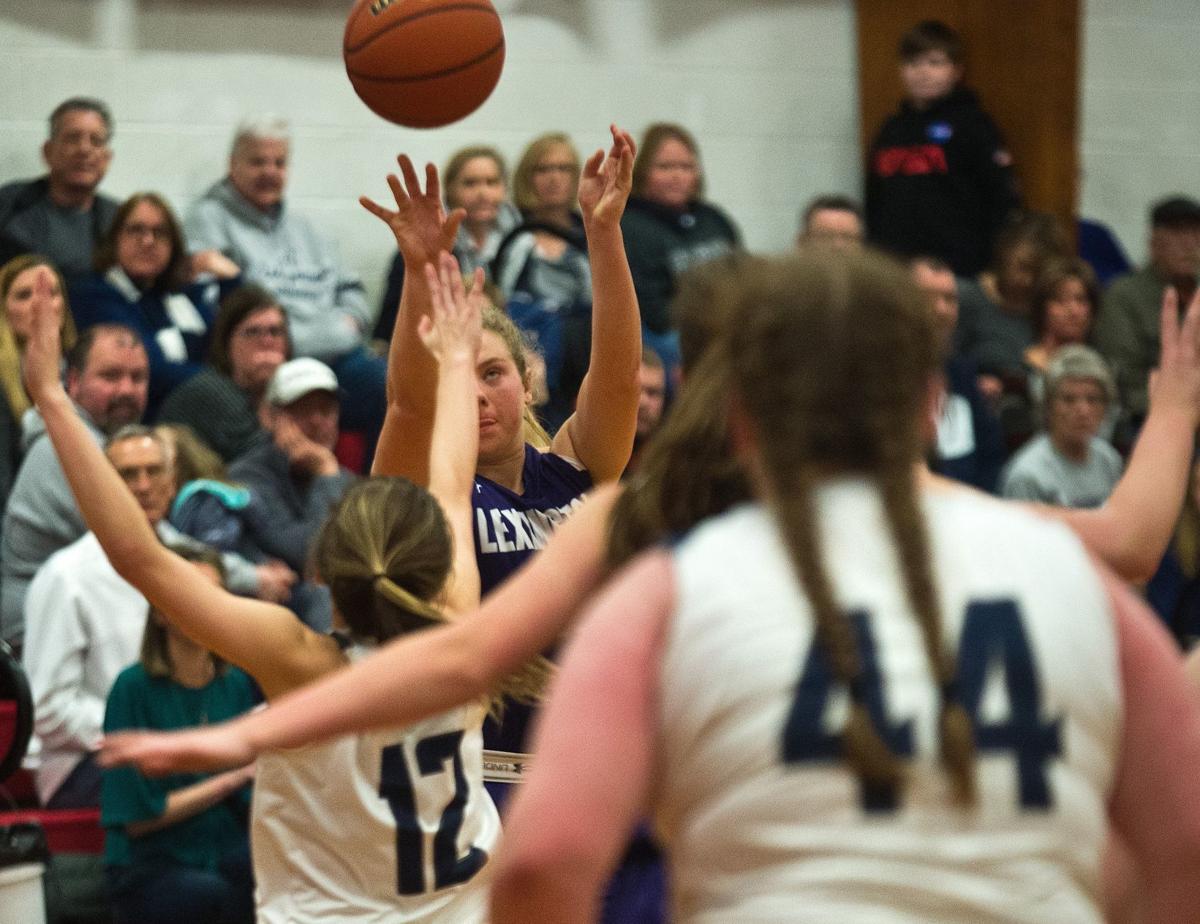 Lexington's Jayden Standish shoots for three over Ridgeview defender River Rosales (12) during the Mustangs' 45-40 Class 1A regional championship victory over the Minutemen on Thursday, Feb. 7, 2019, at Heyworth. 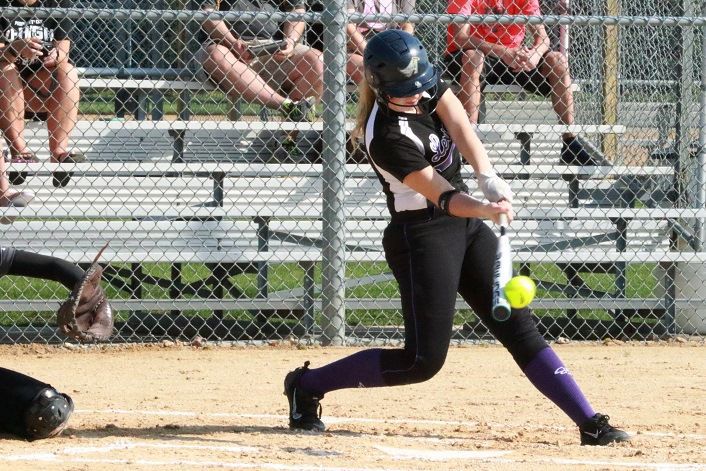 LEXINGTON — When faced with danger, most of us are encouraged to run away while those with proper training head the other way.

The coronavirus pandemic has shown us how much nurses are like firemen racing toward a blaze.

If there was ever a time for prospective nursing students such as Lexington High School senior Jayden Standish to second guess her career path, this would be it.

"If anything, it has just increased my love for the medical field," Standish said. "I know there are so many people out there putting their lives on the line, doing all that they can to get this virus under control. I just can't wait to be a part of that and go out there and help anybody that I can."

That attitude and a regal resume in sports has earned Standish the Pantagraph Area Female Athlete of the Year award for the second time.

"This is one of those things that kind of builds character in your life," Standish said of the pandemic, "a time when you'll be able to tell a story to your family and friends down the road.

"No matter what happens, I'm going to continue to work hard. I do know that I'll get back on the field at some point. I've just got to prepare for that moment. Whatever comes, we'll try to hurdle that together."

As for this school year, Standish only got to hurdle half as much as she did in 2018-19 when she starred in volleyball, basketball, softball and track. The pandemic erased softball and discus throwing from the Illinois State softball recruit's extracurricular inventory.

Standish made the most of those halcyon days before COVID-19 by becoming the only Pantagraph All-Area female first-team selection in both volleyball and basketball.

As a 5-foot-9 outside hitter in volleyball, Standish earned all-Heart of Illinois Conference honors after averaging 3.4 kills per game and 3.7 digs for her 21-16-1 team.

In basketball, the three-time all-HOIC pick gave the 19-12 regional champion Lady Minutemen 14.8 points and 7.1 rebounds per game to go with a total of 38 3-pointers.

We'll never know how her spring would have gone, but a year ago she led area discus throwers with a best of 127 feet, 5 inches and ranked second in softball batting average (.569) and home runs (10).

Standish, who somehow found time to notch a 3.9 grade-point average on a 4.0 scale to rank fifth in her class, credits coaches, teammates and her parents, John and Sara, for making her stellar stats possible.

In volleyball, Standish was coached the past two years by Kelli Shaffer Aho.

"I absolutely loved the way she coached," Standish said. "I'm really excited to see what she can do to build a program at Lexington because I know she can."

"I'm so lucky that I played for him for four years," she said. "We did some damage. That was so fun."

In softball, Standish was coached by Mike Armitage for two years and Jeff Doll for one.

"(Armitage) was awesome," Standish said. "I loved his coaching technique. He really pushed us. He would always come up with new drills for us to do. He's at ISU now (as an assistant coach) so I'll be able to go play for him again, which will be fun.

"Just like Armitage, (Doll) was always coming up with new stuff for us to do. Like coach Aho, he will definitely build the program at Lexington in the next couple years."

In track, Don Anderson coached Standish to a seventh-place Class 1A state finish as a junior. Just the other day while in her garage, she came across her green discus.

"I used it to get a laugh out of him because he despised that discus. I was lucky I had three years with him to make all those dreams and learn so much from him. He was like another father figure in my life. With my crazy schedule, he was always willing to help me out. He was one of my favorite coaches."

Standish hates to think of a future without her teammates.

"I won't get to play with them," she said, "but they'll always be friends."

Standish's parents will always know the way to every athletic venue within 100 miles.

"They were supportive through everything," she said. "They never hesitated to help me put in the time. They drove me to practices. They encouraged those travel sports. It helped me create memories. It helped me have a really fun childhood."

As she prepares to leave Lexington (pop. 2,033) for ISU (enrollment 20,878), Standish knows Lexington will never leave her.

"It is such a small, loving community," she said. "Everybody knows everybody. Everybody comes to everything. Everybody is friends. Everyone cares. It's a great community to grow up in. I made so many friends and had so many great opportunities."

The next opportunity is Division I softball at ISU where Standish has a summer class set to begin June 1. By the time her academic career is over, she'll be a nurse eager to make a difference.

Who's at the head of the class in area girls basketball? You can't go wrong with Lexington's Jayden Standish, last year's area scoring and rebounding leader.

Standish easy pick as Athlete of the Year

LEXINGTON — There was no offense taken when a coach called the Pantagraph’s choice for Area Female Athlete of the Year “a no brainer.”

Prep Spotlight: Lexington’s Standish on a roll as a role model

Pantagraph Female Athlete of the Year Jayden Standish (23) of Lexington High School averaged 14.8 points and 7.1 rebounds per game this past basketball season.

Lexington's Jayden Standish shoots over El Paso-Gridley's Sierra Carr during the Minutemen's 41-24 victory over the Titans in a semifinal of the McLean County/HOIC Tournament on Thursday, Jan. 18, 2018 at Shirk Center in Bloomington.

Lexington's Jayden Standish hustles for a loose ball during the Minutemen's Class 1A regional championship game against Ridgeview on Thursday, Feb. 7, 2019, at Heyworth. Standish led with 13 points and four rebounds, but Ridgeview held on to win, 45-40.

Lexington's Jayden Standish shoots for three over Ridgeview defender River Rosales (12) during the Mustangs' 45-40 Class 1A regional championship victory over the Minutemen on Thursday, Feb. 7, 2019, at Heyworth.