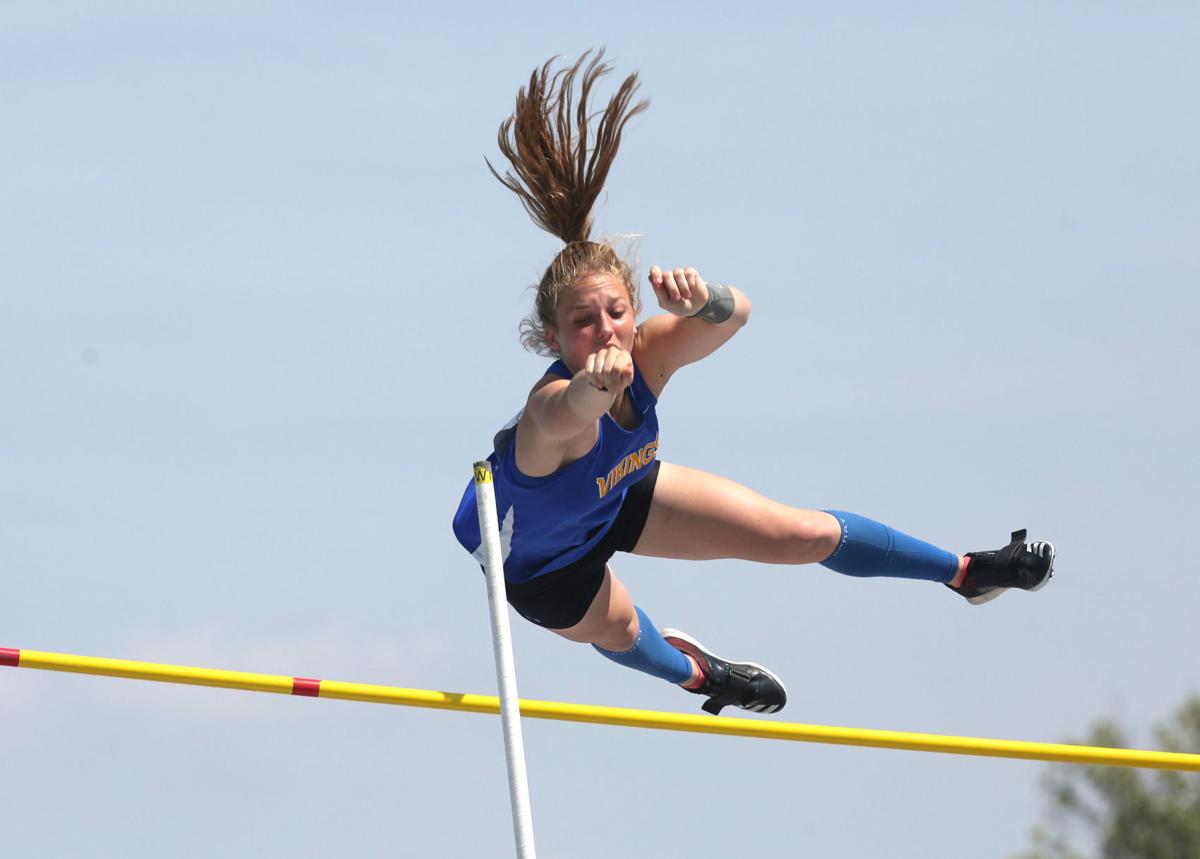 Tri-Valley High School's Windsor Roberts won her second pole vault title on May 18, 2019 at the Class 1A state track and field finals at Charleston. 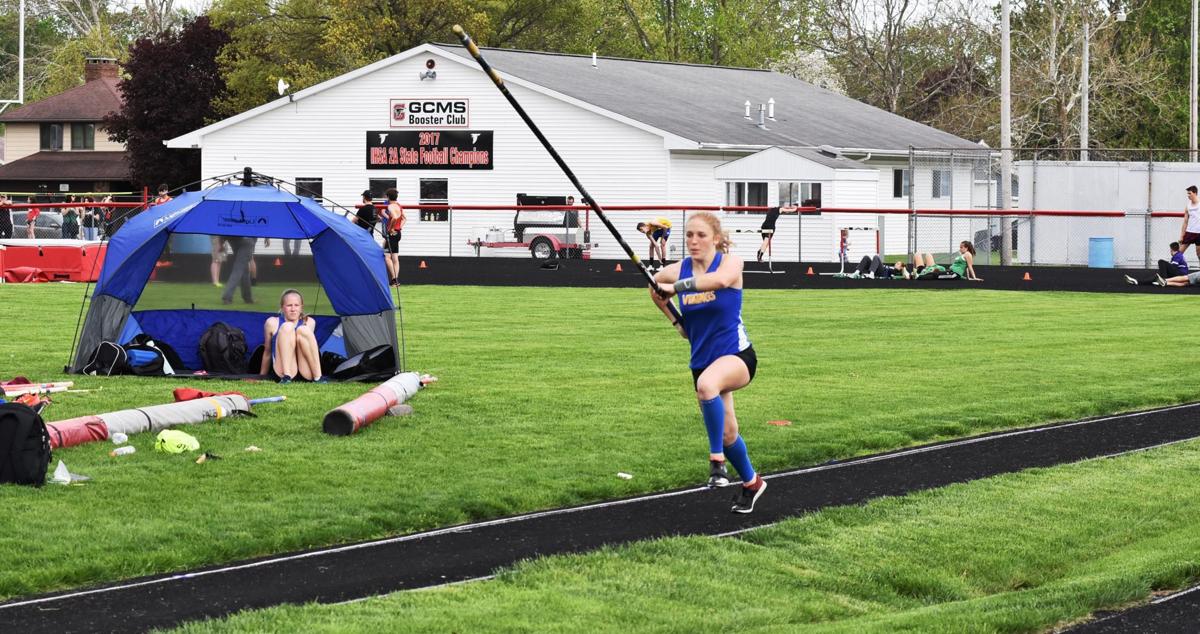 Tri-Valley High School's Windsor Roberts heads down the runway on an attempt in the pole vault Monday, May 6, 2019, during the McLean County/HOIC Track and Field Meet at Gibson City. 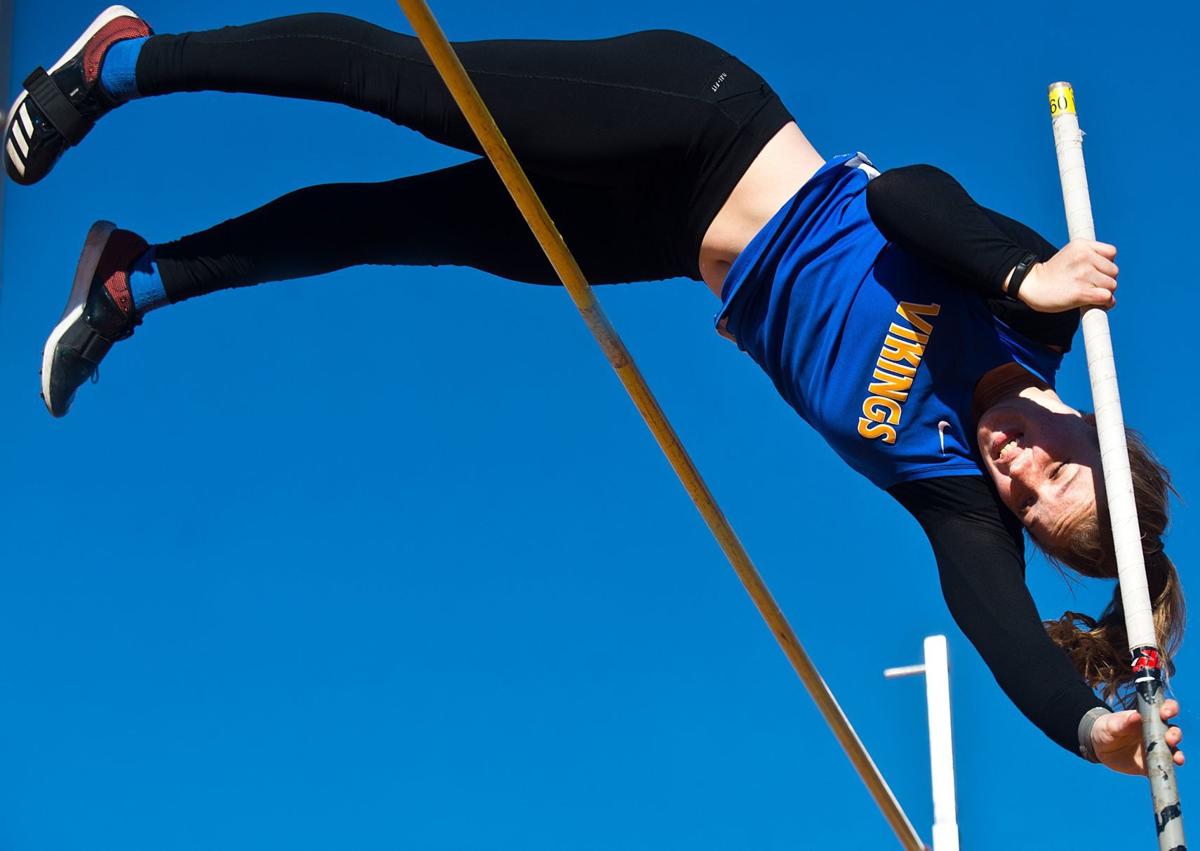 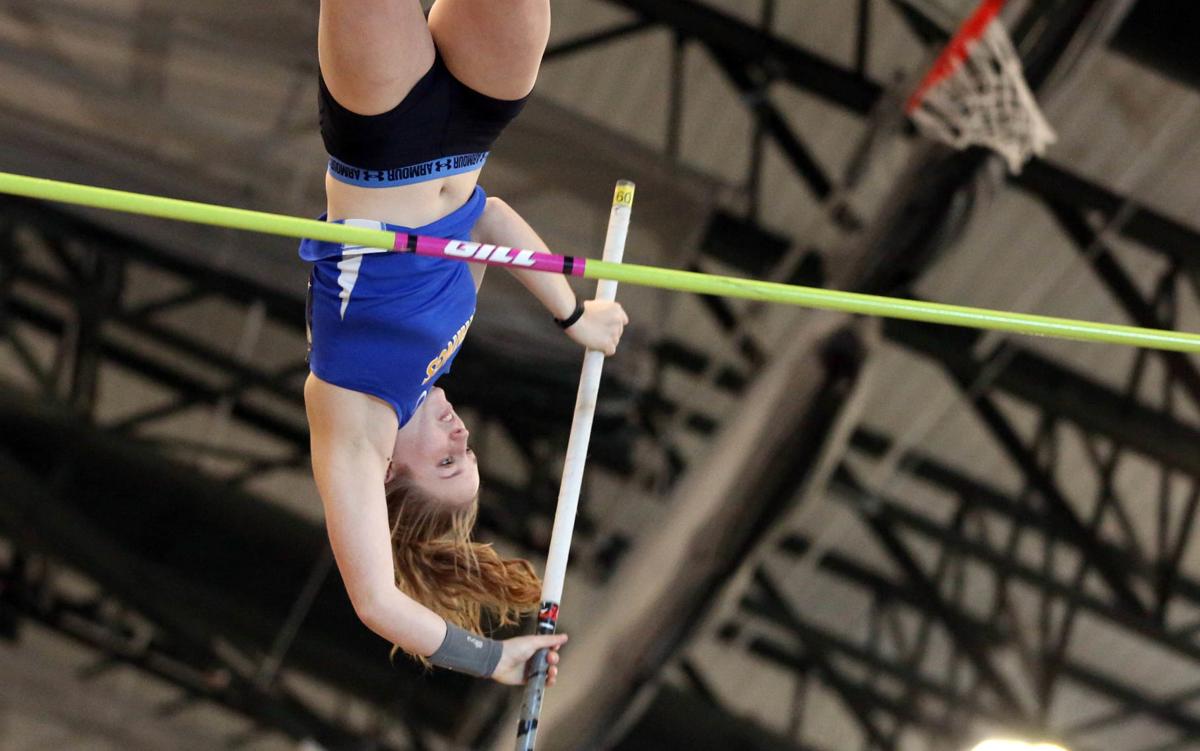 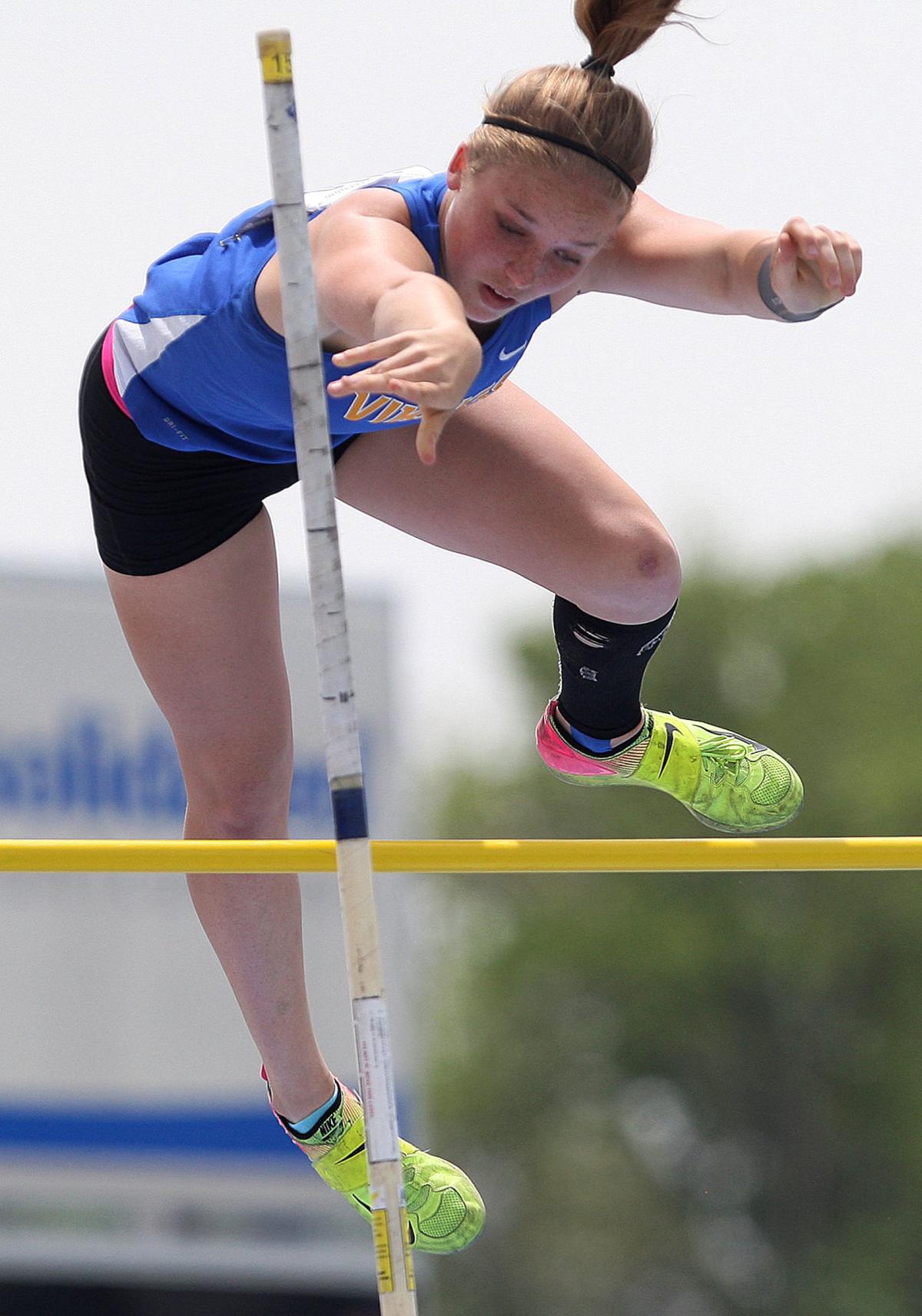 DOWNS — The blame game doesn't usually turn into a win-win situation, but two-time state pole vault champion Windsor Roberts has a knack for getting things to go her way.

That's how it's been for the rising senior at Tri-Valley High School ever since her father, Doug, introduced her to the pole vault. Actually "introduced" may be too passive of a word to describe it.

"He made me start," said Windsor, who was denied a shot at a third consecutive Class 1A state crown by the coronavirus pandemic. "I hated it at first. I was like 'Dad, why do you make me do this? It's horrible.' He kept me going back and then I just fell in love with it."

Roberts took that love to Poston Butte High School in San Tan Valley, Arizona on June 13 for the Desert Dream-Last Hurrah Meet where she tied for second by clearing 13 feet, 1 inch. If she had made that in last month's canceled state meet, she would have broken the 1A record of 13-0.

Last summer, Roberts cleared a lifetime best of 13-5 to finish second in the New Balance Nationals at Greensboro, N.C. Only 15 high school girls nationally went higher in 2019. The only other Illinois girl to ever clear 13-5 was Pontiac's Emily Grove in 2011. Roberts' next chance to fly is June 26 in the Vaulter Magazine Stars and Stripes Big Red Barn Meet at Menifee, California.

"There is a lot of good competition there so hopefully I can jump well," said Roberts, eager for a rematch with California record holder Paige Sommers (14-6), who won in Arizona at 13-7, a height Roberts missed.

Losing her prep season to the pandemic wasn't all bad for Roberts, who injured her left hamstring in late February.

"It allowed her to slowly rebuild instead of feeling 'I need to be jumping in April. I need to be jumping good in May,'" said Tri-Valley pole vault coach Tom Coulon. "There are little blessings of the pandemic in that we had to slow down and stop going 150 mph with everything we do."

Roberts concedes the lockdown was "sort of like a blessing," but it also hurt.

"I was hoping for the third state title," she admitted. "I was hoping to go for that state record that I didn't get last year."

Roberts' goals for the prep season focused more on her journey than her destination.

"I definitely wanted to be able to work on my technique," she said. "The thing I know with the technique is I would have been able to get higher because there were really big flaws that I had found out during my summer season last year.

"I definitely wanted to be able to get faster; get more speed work in so I was faster down the runway because faster means bigger poles."

Roberts, whose biggest poles are 14 feet long, has returned to training in Normal at the Flying Dragons Field Event Center where up to 10 athletes at a time can train while practicing social distancing.

"I've been able to work on a bunch of technique stuff, which I think is going to be really beneficial down the road," she said. "It's kind of hard to get motivated."

Coulon's coaching motivation is to have Roberts ready for college.

"Having the opportunity to compete in college will surpass anything we do in high school, in my opinion, and it will be more meaningful to you because in college you have more of a feeling of 'I earned everything that I got,'" said Coulon, who wants his athletes ready to make adjustments their college coaches may suggest.

"I don't want your career best to be in high school. Career bests should come in college. Those college years will mean everything to you. This is all preparation for college."

Roberts has sought college recruiting advice from Coulon and his son, Adam, who will be a fifth-year senior at Indiana next season.

"I can get some feedback from Adam and ask him questions about college stuff if I ever need to," said Roberts, who has narrowed her college choices to five schools she prefers not to disclose. "That has definitely been a huge help."

Roberts plans to make college visits when the NCAA recruiting dead period ends. She's looking for a university with a supportive team and a coach who can help her improve. She has yet to decide on her major.

"He has experience in track coaching (at Prairie Central), which is really good," Coulon said. "He helps her with her workouts off the pole vault runway. He makes sure she's in shape. He was very involved in her rehabbing of her left hamstring."

Dad also got his daughter into the sport in sixth grade. Within a year she owned the IESA seventh grade state meet record of 10-10.

"Getting to fly through the air is definitely a plus," she said. "It's really fun. It gets everything out of you. You have to be mentally on, physically on.

"Everything has to be just right, but when it is and you get that perfect jump, it's so rewarding. It feels like you are out of this world."

To some, Roberts' first name of Windsor seems, if not out of this world, out of this country. It's a name made for win-win situations.

"It surprises people," she said. "People remember it."

The marks listed are for outdoor meets. x – denotes a manual time that has had .24 added to approximate a fully automatic equivalent.

CHARLESTON — By trusting in her training, Windsor Roberts was bold enough to defend her Class 1A pole vault title in the 47th girls state trac…

Tri-Valley senior Windsor Roberts will be trying for a piece of history Thursday when she attempts to win her third pole vault title in the Class 1A State Track and Field Meet.

Watch now: Declan Bender of Cooksville talks about his motorcycle success at DuQuoin

Countries that have never won an Olympic medal

Countries that have never won an Olympic medal

Tri-Valley High School's Windsor Roberts won her second pole vault title on May 18, 2019 at the Class 1A state track and field finals at Charleston.

Tri-Valley High School's Windsor Roberts heads down the runway on an attempt in the pole vault Monday, May 6, 2019, during the McLean County/HOIC Track and Field Meet at Gibson City.