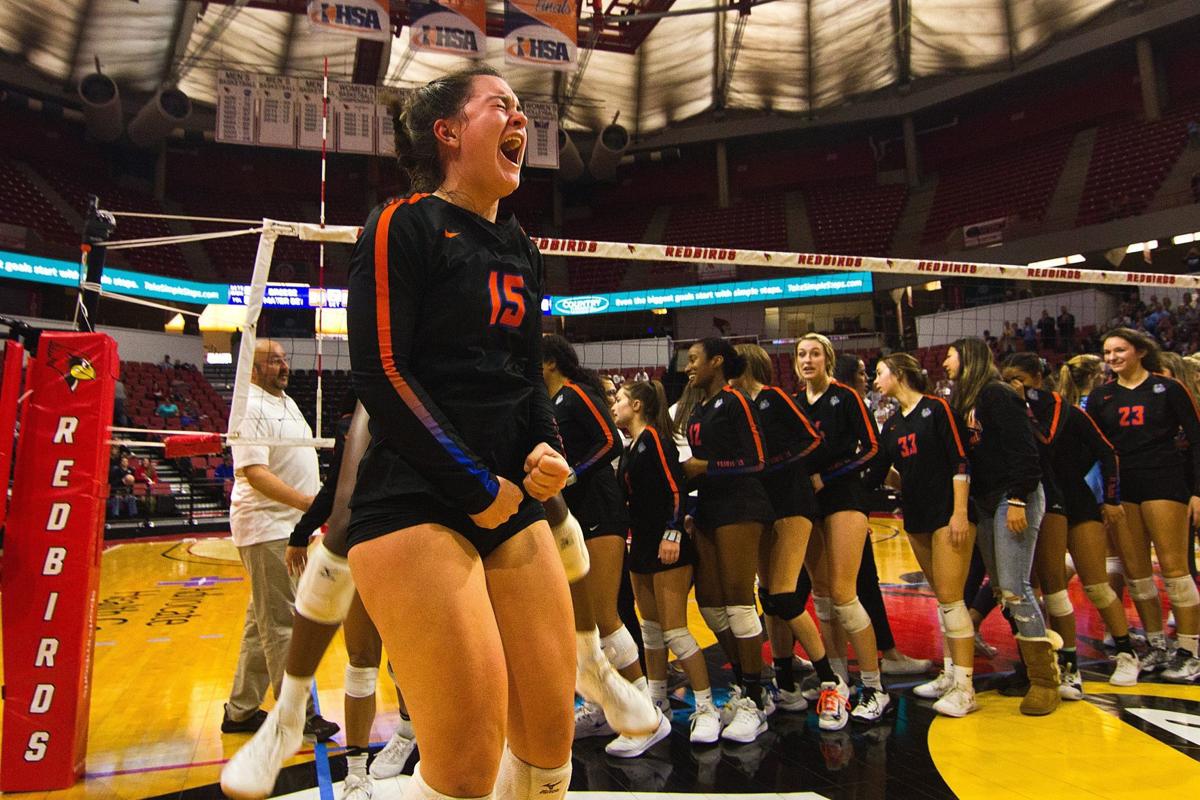 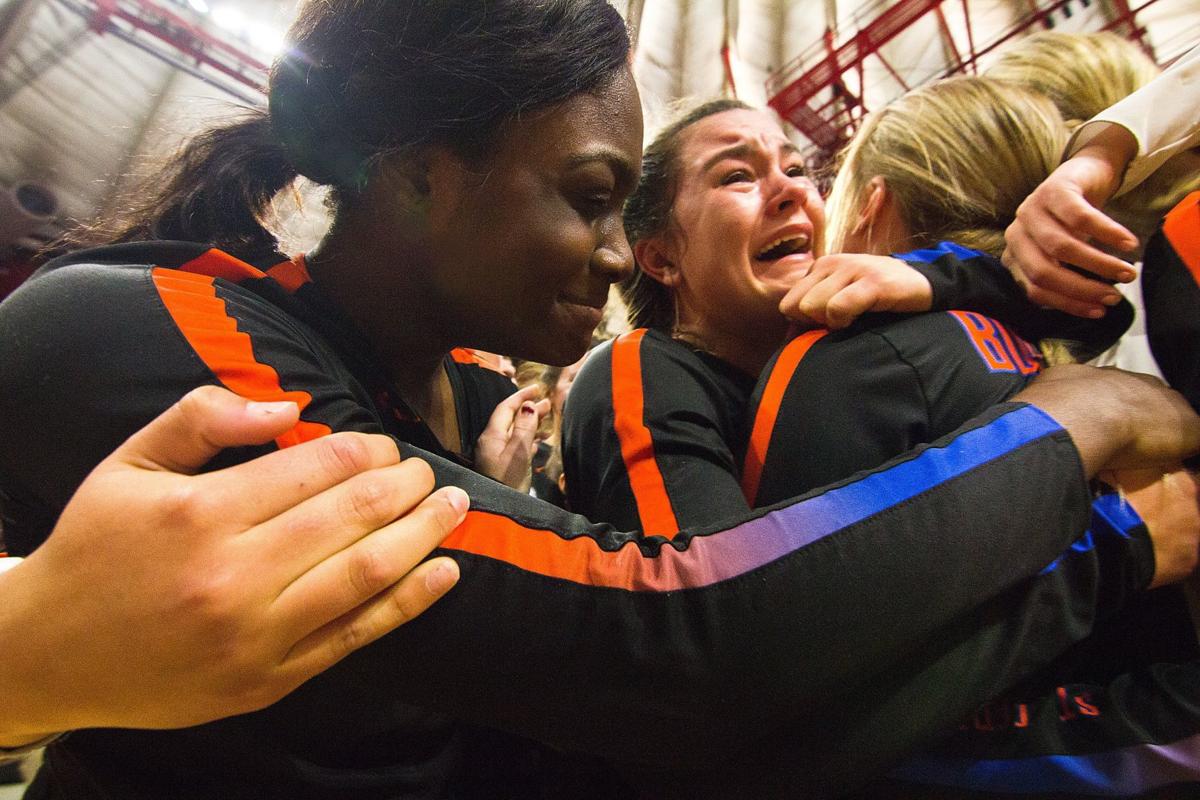 St. Teresa's Abby Robinson, middle, is hugged by teammates after the Bulldogs defeated Breese Mater Dei 25-22, 26-24 in the Class 2A state championship game Saturday, Nov. 16, 2019, at Redbird Arena in Normal. 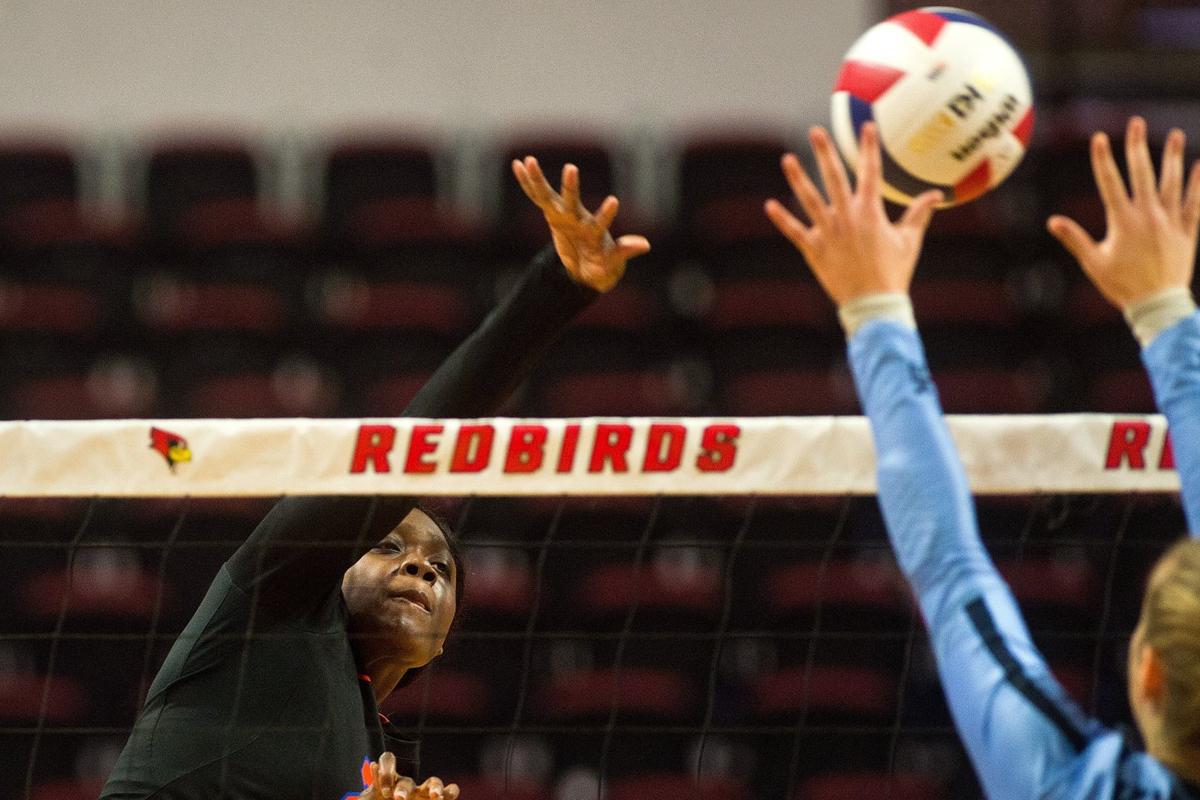 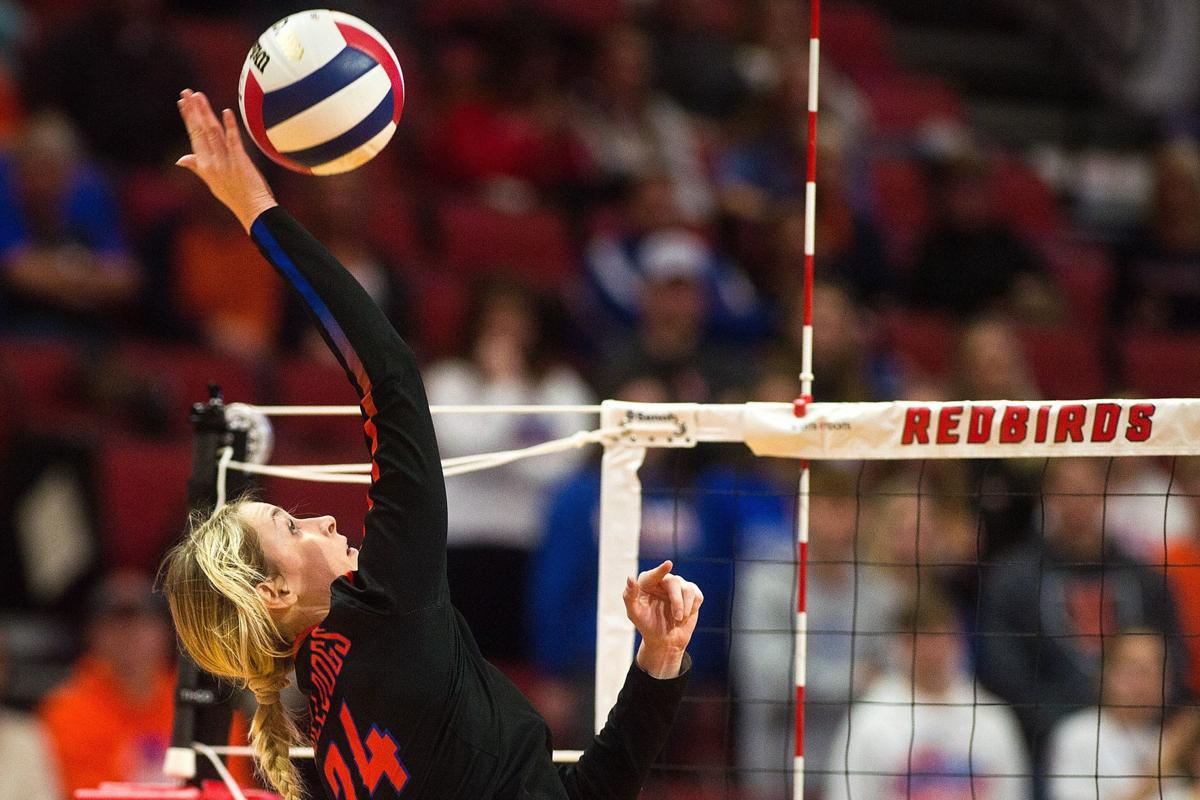 St. Teresa's Caleigh Craft attacks at the net during the Bulldogs' 25-22, 26-24 Class 2A state championship victory over Breese Mater Dei on Saturday, Nov. 16, 2019, at Redbird Arena in Normal. 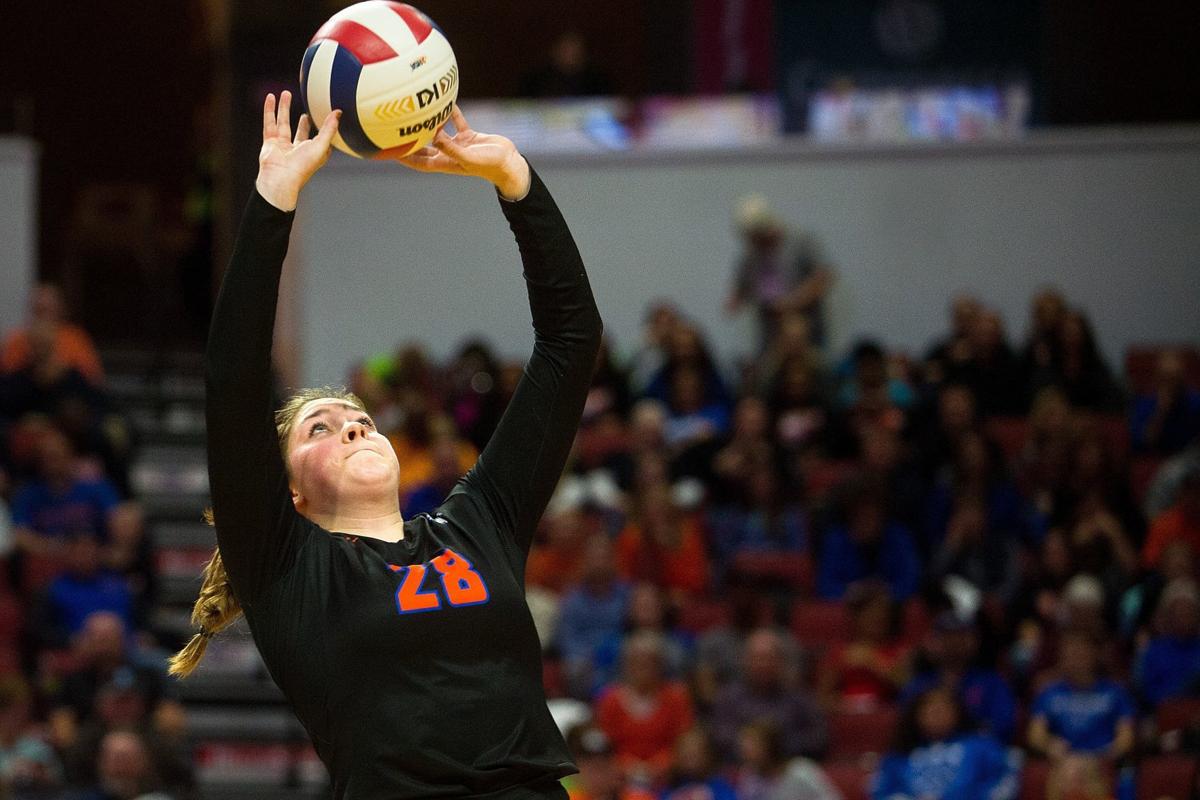 NORMAL — It was the most important dig of Abby Robinson’s life.

St. Teresa’s senior outside hitter was serving for match point in the Class 2A state volleyball championship against Breese Mater Dei on Saturday at Redbird Arena. She delivered a hard-to-handle serve but the Knights recovered and Myah Helmkamp went for the kill.

Robinson lunged forward, her face inches off the ground, to get the dig. The ball floated up towards the net and junior Addison Newbon killed it to give St. Teresa the win 25-22, 26-24 and its first volleyball championship in program history. The Bulldogs are the first Macon County school to become state volleyball champions.

“When the lights come on this group shows up. The bigger the match, the more intensity they play with. They are fighters,” St. Teresa coach Brad Dalton said.

As Robinson served for the championship, her experience kicked in.

“I went back to serve and a calm wave went over me and I stopped shaking and felt OK,” she said. “It really might be the best dig I’ve had. I think diving is super fun. Throwing your body on the floor is one of the most fun things you can do in volleyball and to get it on match point is amazing.”

“We played 100 percent better than the first time we played (St. Teresa),” Breese coach Chad Rakers said. “I wish we could have gotten to them more today but they were hitting good out of system balls too.”

As the Knights came back, Dalton did not call a timeout.

“I trust them. I’ve trusted them all season. Sometimes I trust them too much but I can’t stop trusting them,” Dalton said. “They are experienced and they know what they are supposed to be doing. I give them instructions from the sidelines but stopping them isn’t going to help anything. It will give the other team a chance to feel good about themselves.”

Dalton’s hunch was correct as the Bulldogs didn’t break, winning the first set 25-22.

“If we could take back something it would be the four or five points we gave away in the first set. (St. Teresa) was awful tough. There weren’t many runs going either way and that’s the fist fight I expected,” Rakers said. “The ball is going to roll over the net for one team over another.”

The fight continued in the second set as the teams tied 11 times, the last coming at 24-24. Robinson then served an ace followed by her remarkable dig to finish the match 26-24.

“Afterwards, it was the best moment I have ever had in my life,” Robinson said. “To have that your senior year is one of the most memorable things I think I could ever take away from high school. It’s the best feeling in the world.”

The Bulldogs’ defense was much improved from their state semifinal match on Friday (42 digs vs. 21). Craft had 12 digs, Robinson had 11 and Grace Buxton added nine.

“We read them and our block was there, so that helped a lot,” Buxton said. “We were in the right position, at the right time.”

In their playoff run, the Bulldogs (37-5) battled the top 2A competition, according to MaxPreps.com, and beat them all. They knocked off No. 2-ranked Mater Dei twice, No. 6-ranked Quincy Notre Dame twice, No. 7-ranked Sacred Heart-Griffin, No. 9-ranked Downs Tri-Valley, No. 10-ranked Rockford Lutheran and No. 11-ranked Orion.

This was the fourth trip to the state tournament for the Bulldogs and their highest finish. The team finished in third place at last year’s Class 1A tournament and fourth in the 2010 and 2011 Class 2A tournaments. Overall, it's the 10th state title in St. Teresa's school history.

“We fought and we fought. This is a big win for everybody in our program,” Dalton said. “This proves that we are going the right way. I can’t say enough about the seniors. Breese fought every point and it was a pretty good championship match.”

Matthew Flaten's most memorable stories from 2019

St. Teresa's Abby Robinson, middle, is hugged by teammates after the Bulldogs defeated Breese Mater Dei 25-22, 26-24 in the Class 2A state championship game Saturday, Nov. 16, 2019, at Redbird Arena in Normal.

St. Teresa's Caleigh Craft attacks at the net during the Bulldogs' 25-22, 26-24 Class 2A state championship victory over Breese Mater Dei on Saturday, Nov. 16, 2019, at Redbird Arena in Normal.