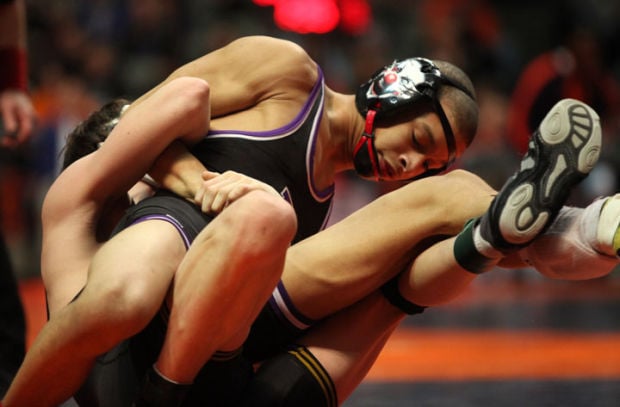 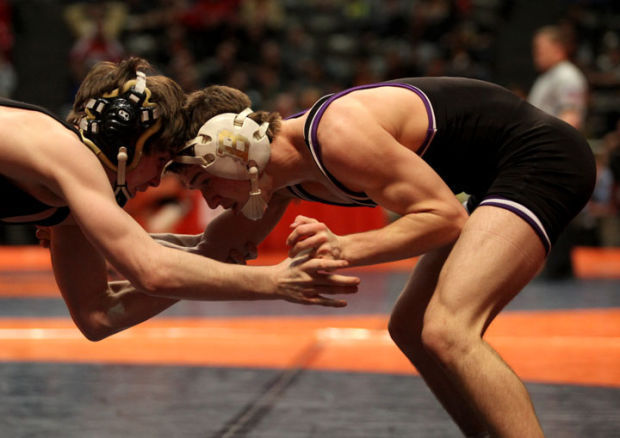 Bloomington's Jack Henderson, right, looks for an advantage against Oak Forest's Dan Swan in a Class 2A, 113-pound semifinal match at the state wrestling tournament on Friday in Champaign. Swan won the match by a 5-2 decision.

CHAMPAIGN — Dreams of unlimited possibilities probably bounced inside the head of Josh Wallick if he was able to sleep following Friday’s excitement in the 77th annual state wrestling tournament.

The pride of the Gibson City-Melvin-Sibley and Fisher co-op, Wallick was the only winner among eight Pantagraph area semifinalists at State Farm Center. The other seven guaranteed themselves medals with quarterfinal wins.

“This is what it’s culminated to, my entire season,” Wallick said. “I’m going for it.

After a scoreless first period, Nunez escaped the bottom position to lead 1-0 going into the final period. Wallick, who has trailed less than a handful of times this year, also escaped from the bottom to tie it. The go-ahead point came with 1:30 left when Nunez was called for stalling.

“When I was locking up for the double-under bear hug, he was backing up,” said Wallick, who beat Nunez in overtime earlier this year. “He knew I would take him down if I got that so he didn’t want anything to do with that. I’m glad I got the penalty point.”

“It gives me a little bit more courage to take more shots and know that they will be effective,” he said.

No. 1-ranked Andrew Marsden of Crystal Lake Central notched his second win of the year over the No. 3-ranked Weltha, pinning him in the semis in 1:31. The score was 15-1 in their first meeting. Weltha (36-5) won his quarterfinal, 7-3, over No. 8 George Bessette of Antioch.

“He was trying to keep it close and I didn’t want that,” Weltha said of Bessette. “I tried to use my strength against him to get the job done.”

“When it comes to the state tournament,” Henderson said, “rankings don’t mean anything.”

“Getting a second pin in the state tournament is awesome,” Gray said.

Pontiac’s No. 6-ranked Richardson (41-4) dropped his semi, 3-2, against No. 3 Randle Tabor of Springfield (39-0). In the quarters, Richardson tipped Mundelein’s Anthony Swindell, 6-5. Swindell led, 4-1, in the third period before Richardson turned a reversal into a five-point move.

“I start out slow normally and I pick up the pace,” Richardson said.

LeRoy’s No. 8-ranked Wilson (31-7) upset No. 3 Lucas Duckett of Shelbyville in the quarters, 6-5, before losing for the third time this year to No. 2 Bruce Ivey of Sterling Newman, 7-2. Sixth a year ago, Wilson scored the deciding takedown against Duckett with four seconds left.

“I think he was thinking it was going to go to overtime so I just took advantage of that,” Wilson said.

Bauer, who lost in last year’s quarters, reached the semis by pinning No. 8 Joe Behan of Carterville in 3:13.

“He was giving me that chicken wing the whole match so I knew I had to get it,” Bauer said.

Also alive in the 2A wrestlebacks are Mahomet-Seymour’s Kolton Taylor (126), Pontiac’s Jake Lanning (152) and Bloomington’s Shawn Safford (160). Normal West’s Luke Nohns (182) will be in Saturday’s 3A wrestlebacks.

Bloomington's Jack Henderson, right, looks for an advantage against Oak Forest's Dan Swan in a Class 2A, 113-pound semifinal match at the state wrestling tournament on Friday in Champaign. Swan won the match by a 5-2 decision.