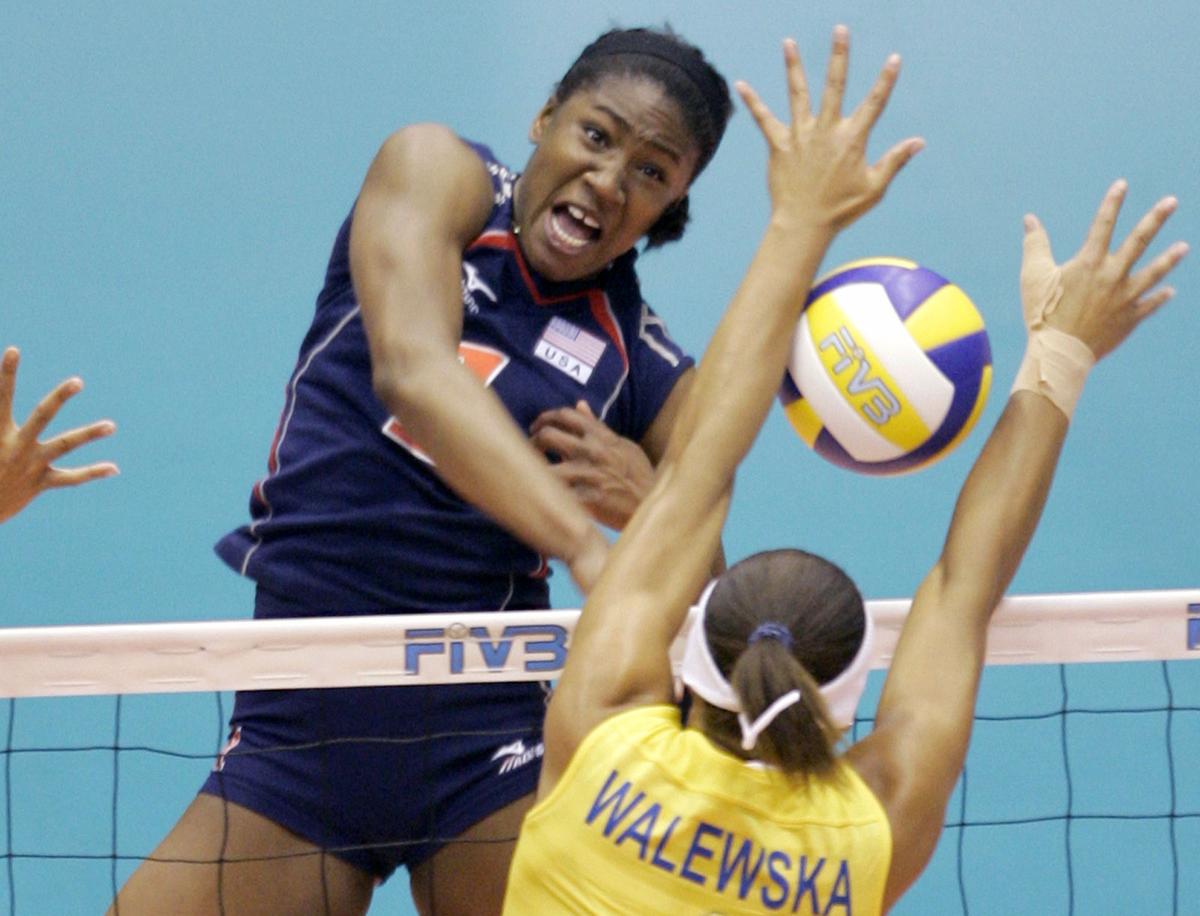 Ogonna Nnamani Silva spikes the ball for the U.S. during a 2007 World Cup match against Brazil in Sendai, Japan. The former University High School star has been inducted into Stanford's Hall of Fame. 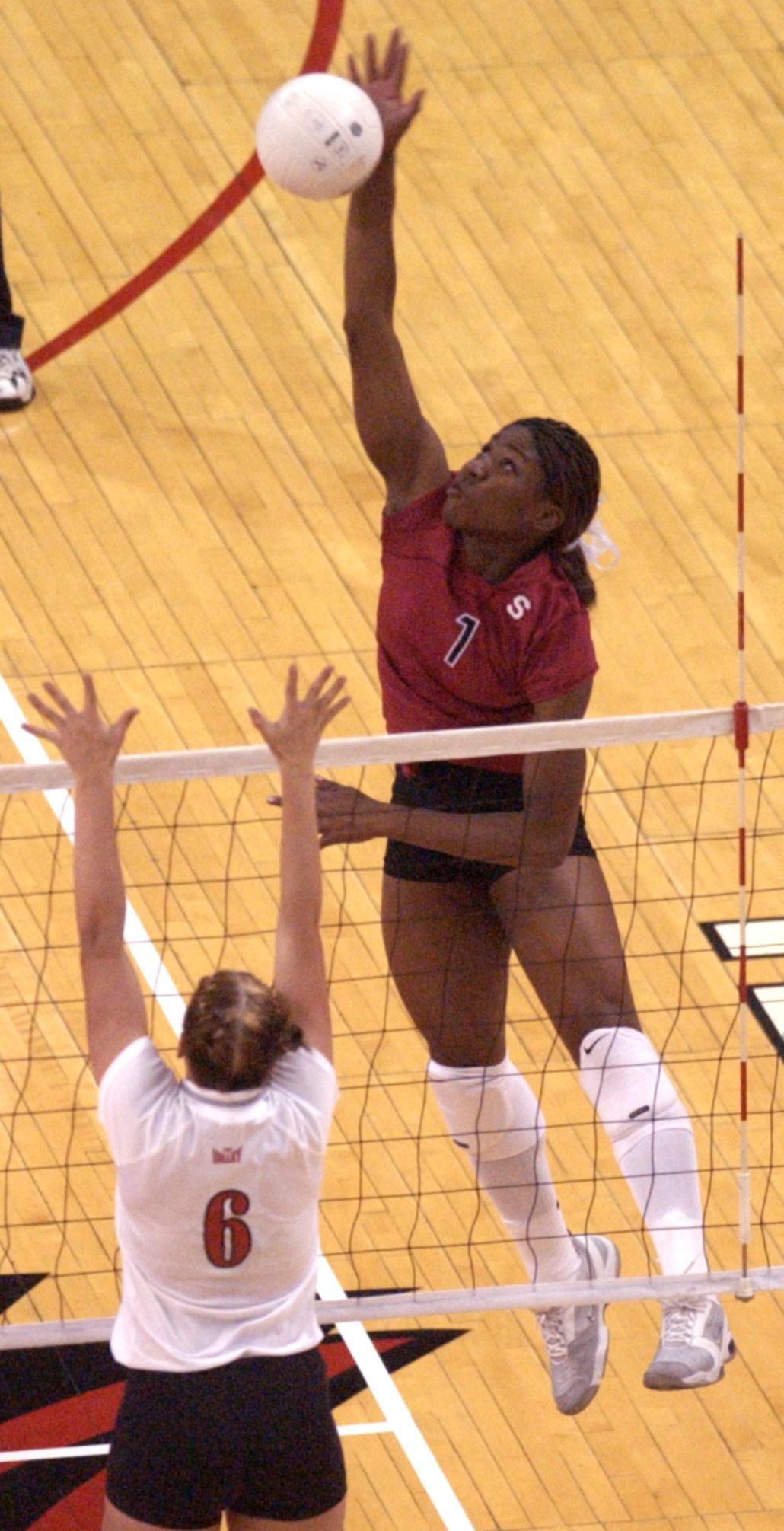 When it came to getting up for a volleyball match at Redbird Arena in 2002, former University High School and Stanford star Ogonna Nnamani had no peer. 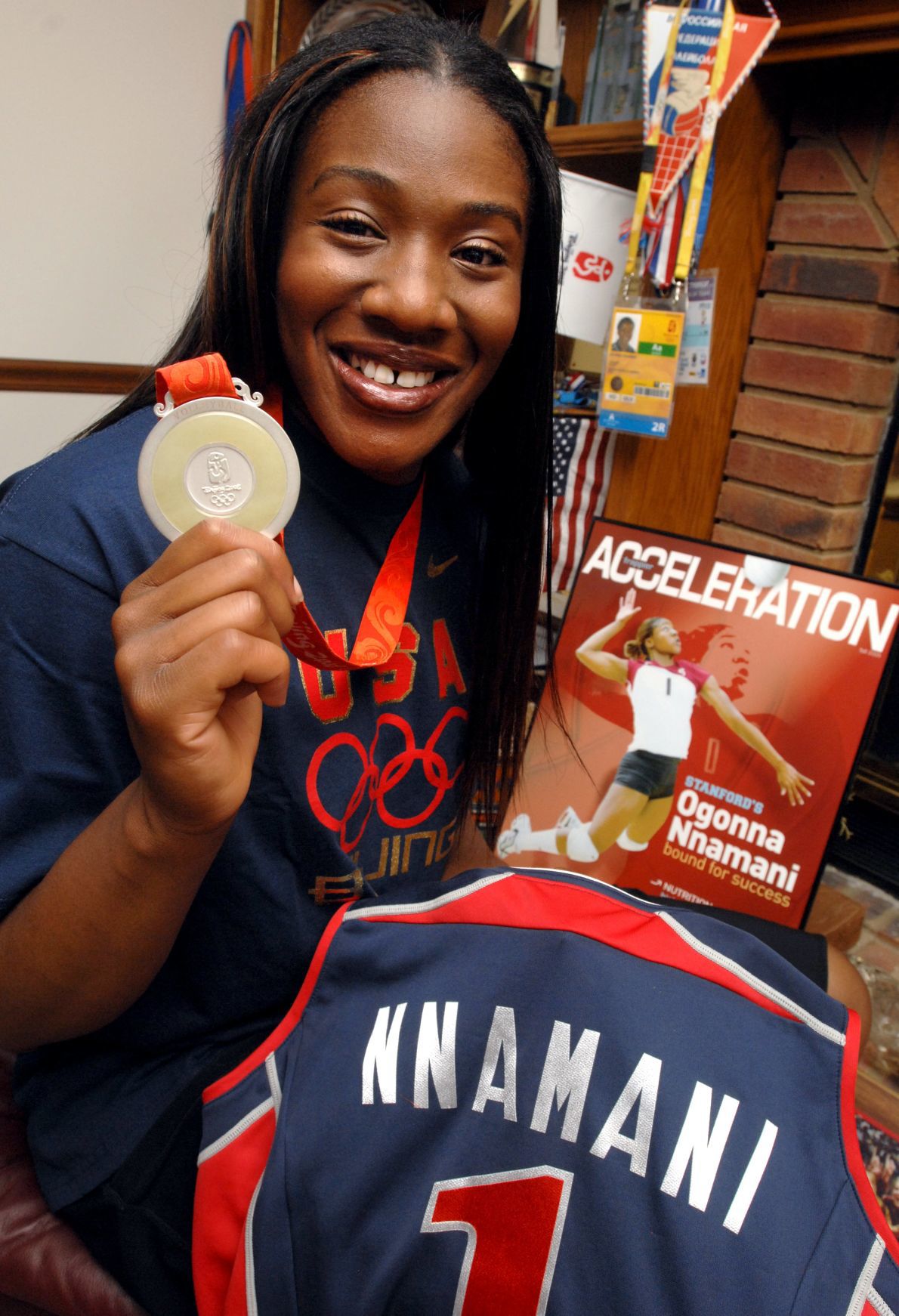 University High School graduate Ogonna Nnamani Silva posed in 2008 with the silver medal she won with the U.S. volleyball team at the Beijing Olympics.

Before Ogonna Nnamani Silva could get on with her life, she had to retire.

Like all athletes, the two-time Olympian from Bloomington knew she'd have two lives: the one that took her all over the world playing volleyball at its highest level and another as a retired player.

Much like her playing career, Nnamani Silva's retirement is producing some nifty highlights. The latest were the birth of her daughter, Anya, six months ago and being inducted into the Stanford Hall of Fame on July 7.

Of the latter achievement, the 2001 University High School graduate said, "It's a true honor. It's just incredible. I'm just very lucky to have had the chances that I've had.

"It's not really an award for me. I see it as an award for my family, my community in Bloomington-Normal and all my teammates and coaches that helped me along the way."

The decision to honor Nnamani Silva (and seven others) at a private reception Oct. 16 in Stanford, Calif., is of the "no brainer" variety.

Her school record 2,450 career kills rank 11th in NCAA history. They were the product of a 6-foot-1 outside hitter being able to touch 11 feet high thanks to a 36-inch vertical jump.

Before her senior season, she was the youngest member of the U.S. volleyball team in the 2004 Athens Olympics. Four years later in the Beijing Olympics, she helped the U.S. win silver.

Almost lost in the glitz of all that is a high school career that saw Nnamani Silva earn Gatorade National Player of the Year honors after leading U High to a 149-15 record and four Class A state tournament berths including titles in 1999 and 2000.

When asked what she's most proud of, Nnamani Silva said, "I think I'm most proud of being a mom. It's really an amazing experience."

Nnamani Silva hopes Anya will be amazed by sports.

"Sports have taught me a lot of life lessons that I use today so because of what I learned from sports, I really want her to be a part of it," Nnamani Silva said.

"If you do what you love, you'll do it well. I just hope she'll find whatever activity that she loves and I hope she does it well."

As Nnamani Silva played professionally for five years in Puerto Rico, Switzerland, Turkey, Italy and the Czech Republic, she yearned to be closer to loved ones and closer to starting a career as a doctor.

When former Stanford football player Mike Silva, who had dated her for five years, proposed, it was a chance to retire on her terms. They married on Aug. 25, 2012.

Now 31, Nnamani Silva, is a clinical research assistant at Stanford's Cancer Center and is applying to medical school. She's come a long way from being the youngster who was reluctant to join Metcalf's eighth grade volleyball team.

"Coach (Pam) Naffziger said, 'you've got to try it,'" Nnamani Silva remembers. "I'm so thankful she didn't give up on asking me to be part of the team."

Now Nnamani Silva can laugh at her hesitation. Still a fan of the sport, she misses her teammates.

"We would laugh so hard until we cried," Nnamani Silva said. "I miss that a lot."

She also misses pushing her body in training and feeling pregame adrenaline.

Since retiring, Nnamani Silva hasn't played volleyball recreationally. Because of her competitive nature, she doesn't know if she can.

"That doesn't go away," she said. "I have to get over that and just learn to play for playing's sake."

Perhaps at a future family picnic, when a net goes up and a volleyball flies, an athletic-looking doctor will join in and gently tap the ball across the net. Opponents should probably wear helmets just to be safe.

As two-time Olympian Ogonna Nnamani Silva prepares to graduate from medical school amidst a pandemic, she's counting on lessons she learned as an athlete to help her persevere.

Ogonna Nnamani Silva spikes the ball for the U.S. during a 2007 World Cup match against Brazil in Sendai, Japan. The former University High School star has been inducted into Stanford's Hall of Fame.

When it came to getting up for a volleyball match at Redbird Arena in 2002, former University High School and Stanford star Ogonna Nnamani had no peer.

University High School graduate Ogonna Nnamani Silva posed in 2008 with the silver medal she won with the U.S. volleyball team at the Beijing Olympics.