© 2020 Lee Enterprises
Terms of Service | Privacy Policy
Share This
White Sox are the most improved. Cubs are stuck in neutral. And the Indians and Cardinals are making moves. Tracking the offseason moves in the AL and NL Central.
0 comments
Share this
{{featured_button_text}}
1 of 2

The Chicago White Sox agreed to a one-year, $12 million contract with veteran slugger Edwin Encarnación, a source said Wednesday. The deal would include a club option for the White Sox for the 2021 season.

Cardinals starting pitcher Adam Wainwright pitches in the second inning of a game between the St. Louis Cardinals and the Chicago White Sox at Busch Stadium in St. Louis on Tuesday, June 12, 2012. Photo by Johnny Andrews, jandrews@post-dispatch.com

The White Sox have been one of the most active teams this offseason. The Cubs one of the quietest.

But how do they compare to the other teams in their divisions?

The Indians’ biggest deal so far is the signing of second baseman Cesar Hernandez, 29, to a one-year, $6.25 million deal. Over seven seasons with the Phillies, Hernandez’s slash line was .277/.352/.381 with 46 homers and 253 RBIs. Earlier in December, they traded Corey Kluber to the Rangers for 21-year-old right-handed reliever Emmanuel Clase (23\u2153 innings of relief last season, his first in the majors, with a 2.31 ERA), and outfielder Delino DeShields, 27, who played five seasons for the Rangers, with a .246/.325/.347 slash line. The Indians finished second in the division, with a 93-69 record, three games out of the wild card.

The Royals, who finished fourth with a 59-103 record, made some moves. They traded infielder Christian Perez to the Yankees for 25-year-old right-hander Chance Adams, who has made 16 major-league appearances, including 13 for the Yankees in relief last season. The team also signed third baseman Maikel Franco to a one-year, $2.95 million deal. Franco batted .234 with a .297 OBP and 17 home runs for the Phillies last season. Former Cubs pitcher Mike Montgomery signed a one-year, $3.1 contract, avoiding arbitration.

On Dec. 13, catcher Austin Romine signed a one-year deal, reportedly for $4 million. He hit .281 with eight homers and 35 RBIs in 72 games with the Yankees last season. On Dec. 21, the Tigers signed first baseman C.J. Cron and second baseman Jonathan Schoop. Both were one-year deals for $6.1 million, according to reports. The two bring power to the Tigers, combining for 48 homers and 137 RBIs for the Twins last season. The Tigers lost 114 games last season, finishing last in the Central.

The Twins won 101 games and the division by eight games in 2019 -- and so far their offseason moves have been minor. The team signed former All-Star catcher Alex Avila to a one-year, $4.25 million deal to back up Mitch Garver. Avila, who played for the White Sox in 2016 and the Cubs in 2017, played in 63 games for the Diamondbacks last season. The Twins also added veteran right-handed reliever Tyler Clippard and re-signed Sergio Romo, who was 2-1 with 20 saves and 60 strikeouts over 60\u2153 innings in 65 appearances last season for the Marlins and the Twins. Pitcher Jake Odorizzi accepted a reported $17.8 million qualifying offer on Nov. 14. Odorizzi was an All-Star in 2019. He set career highs in wins (15) and strikeouts (178) while finishing with a 3.51 ERA.

The Sox already are one of the most improved teams in baseball -- thanks to a busy offseason. Their deals include: a one-year, $12 million deal with 37-year-old slugger Edwin Encarnacion, who hit 34 home runs in 109 games last season with the Mariners and Yankees; a three-year, $55.5 millions deal with former Cy Young Award winner Dallas Keuchel; a four-year, $73 million deal with two-time All-Star catcher Yasmani Grandal; a trade for former Rangers outfielder Nomar Mazara; a one-year, $5 million deal with southpaw Gio Gonzalez. Also, Jose Abreu returns after agreeing to a three-year, $50 million deal on Nov. 22. He originally accepted the Sox’s qualifying offer on Nov. 14. Abreu led the AL with 123 RBIs in 2019. The Sox finished third in the AL Central with a 72-89 record.

The Cardinals had only two games started by a left-handed pitcher in 2019, according to the St. Louis Post-Dispatch. On Dec. 17, the team announced the signing of Kwang Hyun Kim, a 31-year-old Korean southpaw who reportedly averages in the low-to-mid 90s on his fastball and throws "a fast slider and a slow slider,” he told the Post-Dispatch. The two-year deal is worth $8 million. Kim was named the best pitcher in the Korean Baseball Organization with a 17-6 record and a 2.51 ERA. The Cardinals won the Central with a record of 91-71.

The Cubs apparently are waiting on a possible Kris Bryant trade or at least a ruling on his service-time grievance. In the meantime, they have acquired low-cost relievers to replace departing free agents Brandon Kintzler, Pedro Strop and David Phelps. The new arms include righty Ryan Tepera, righty Dan Winkler and lefty CD Pelham. The Cubs finished third and out of the playoffs with a record of 84-78.

The Pirates finished last in the Central at 69-93. Thus far they’ve made only one significant player move, signing free-agent catcher Luke Maile to a one-year contract. Maile, 28, is valued for his defensive skills. He hit .151 with a .440 OPS last season, and he is a career .198 hitter. The more significant decision was hiring former Red Sox general manager Ben Cherington as the team’s new GM.

The Reds, who finished in fourth with a 75-87 record, have made two big moves this offseason. First they bolstered their strong rotation by signing 33-year-old Wade Miley to a two-year, $15 million contract. He was 14-6 with a 3.98 ERA for the Astros in 2019. Then the Reds signed free agent Mike Moustakas to a four-year, $64 million deal. Moustakas has played third base most of his career, but, according to the Cincinnati Enquirer, he will play second base in Cincinnati. He hit at least 28 homers in each of the last three seasons.

CHICAGO — Federal prosecutors have launched an investigation into whether the Chicago Cubs' $1 billion, five-year renovation of Wrigley Field …

CHICAGO — The Chicago Cubs did not offer a 2020 contract to shortstop Addison Russell on Monday, making the 2016 All-Star a free agent one yea…

The Chicago White Sox agreed to a one-year, $12 million contract with veteran slugger Edwin Encarnación, a source said Wednesday. The deal would include a club option for the White Sox for the 2021 season.

Pitcher Dallas Keuchel, shown throwing in September against the Mets in New York, has finalized a three-year, $55 million contract with the Chicago White Sox. 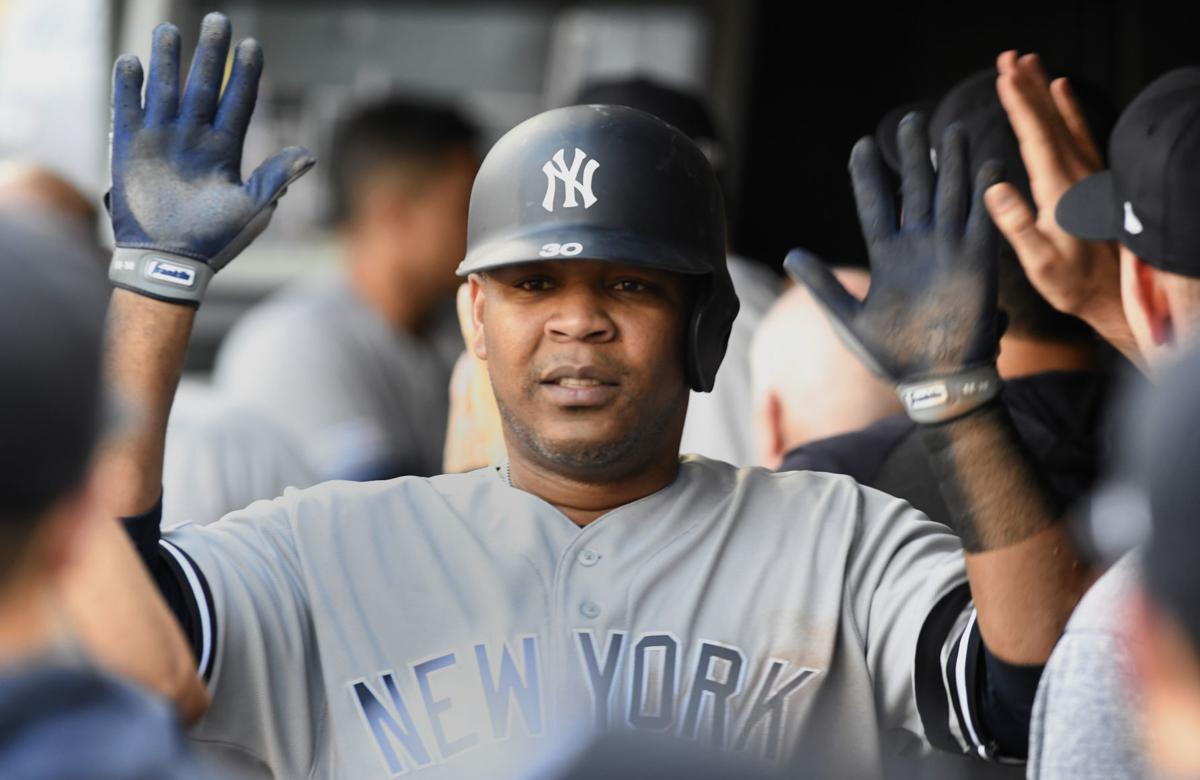 New York Yankees' Edwin Encarnacion celebrates in the Yankee dugout during a July game against the Twins in Minneapolis. Reports Wednesday night indicate Encarnacion will sign a contract with the Chicago White Sox.

Cardinals starting pitcher Adam Wainwright pitches in the second inning of a game between the St. Louis Cardinals and the Chicago White Sox at Busch Stadium in St. Louis on Tuesday, June 12, 2012. Photo by Johnny Andrews, jandrews@post-dispatch.com